The details of the RMS Titanic’s sinking and Titanic facts fascinate people from all walks of life, all over the world. The story of this large ocean liner holds a place in our shared cultural memory. From kids to adults, everyone has an interest in the Titanic. There are countless movies and stories about the sinking of the Titanic, and many well-known facts about its construction, and the famous boast of it being an ‘unsinkable ship’.

Despite the tragic history of the Titanic, one positive Titanic fact is that the sinking of the ship led to greater safety standards. Requirements for lifeboats and wireless communication systems aboard ships were strengthened and more widely enforced after the sinking of what was then the world’s largest ship afloat. 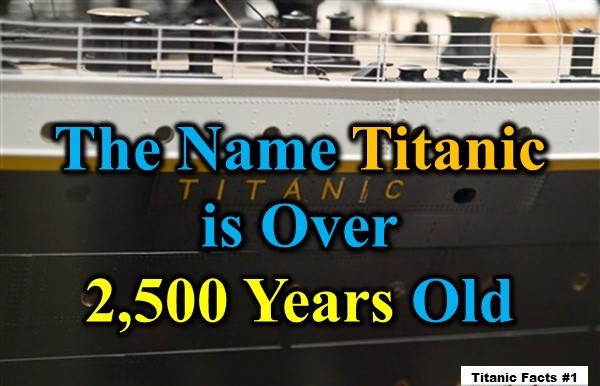 One of the most important Titanic facts has its roots further back in history than you might think. When the builders of the Titanic were searching for a name, they wanted a name for the ship that meant huge. They also wanted a name that elevated the Titanic as a monumental work of shipbuilding. The shipbuilders Harland and Wolff chose a name from Greek mythology.

The name Titanic comes from Titan. In Greek mythology, Titans were the ancient Gods of Greece. Thought to be giants, Titans were overthrown by a race of younger Gods, the Olympians, including Zeus and Athena. Once you know this, it’s not surprising to learn that the Titanic’s sister ship was named the Olympic. The two ships were constructed at the same time and were incredibly similar in design.

2. 7 People Died on the Titanic Before it Launched 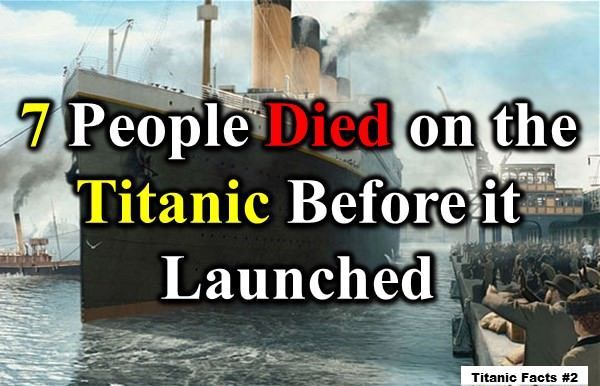 It’s a gruesome Titanic fact that people died during the building of the ship and her sister ship, the Olympic. The Titanic was built over 100 years ago, between 1908 and 1911, and the health and safety conditions of the workers were nowhere near those that we have today. Workers didn’t even wear hard hats when they were building the Titanic!

Six people died on the ship itself during the construction of the Titanic, and 246 injuries were recorded. This sad Titanic fact may have foretold the tragic fate of the ocean liner. It’s a spooky Titanic fact that another worker was killed right before the ship’s launch. It almost seems as though the ship was cursed from the start. We should remember, though, that poor safety conditions in the early 1900s led to many deaths on other major projects, such as the building of the Panama Canal.

3. The Steel Rivets on the Titanic Weighed Over 1,200 Tons 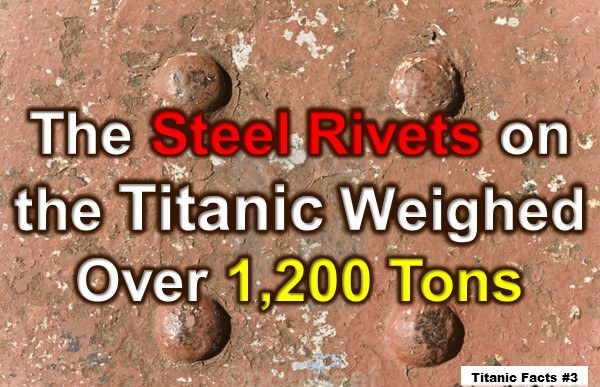 Perhaps it was all the boasting about the size of the ship that first made interesting facts about the Titanic a part of our culture, even before the ship was launched. The White Star Line that commissioned the building of the Titanic wanted to boast to its passengers that they had built the biggest ship in the world.

Nearly every Titanic fact regarding the size of the ship deserves an exclamation point. The steel rivets holding together all the metal on the ship alone weighed over 1,200 tons! The rudder of the ship had to be steered with engines, and weighed in at over 100 tons! The two main reciprocating engines that powered the ship weighed over 700 tons! The ship was built on such a massive scale that it’s still huge, even by today’s standards.

The Titanic was identical to its sister ship, the Olympic, except for some minor differences. The Titanic had a steel screen with sliding windows installed on one of its decks. The screen was added to give first class passengers more shelter from the elements. Perhaps it was more the feeling of protection that the builders wanted the first class passengers to have. Because of the screen and other changes, the Titanic was slightly heavier than the Olympic, and could rightly claim the title of the largest ship afloat at the time.

4. The Titanic was a Massive Polluter Burning 600 Tons of Coal per Day 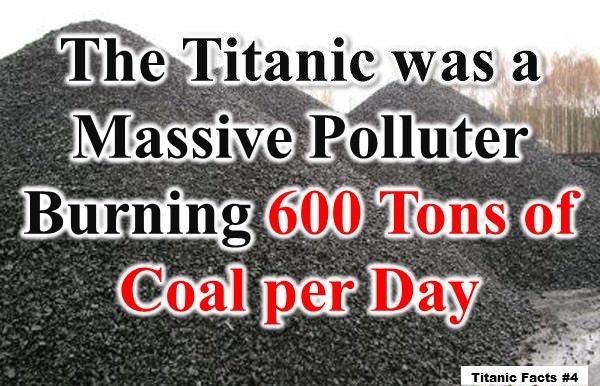 With all that weight to move as the biggest ship afloat, the Titanic was probably the most polluting ship of its time! Steam power was the only power source in those days that could deliver the over 40,000 horsepower that was needed to move the Titanic through the water. We can’t quite call it a green Titanic fact — the Titanic used over 600 tons of coal each day it was at sea!

It took over 170 workers, working 24 hours a day, seven days a week, to feed the furnaces powering the steam engines on the Titanic. There were over 150 furnaces on the ship, heating nearly 30 boilers to create the steam that powered the engines. Each day, 100 tons of ash had to be jettisoned into the sea. This was non-stop, around the clock! The furnaces were constantly burning coal to keep the ship moving.

5. The Mail Room in the Titanic Handled 60,000 Pieces of Mail Each Day 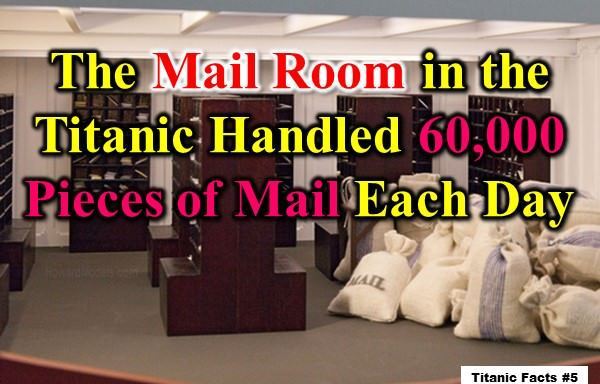 One interesting Titanic fact is that it was commissioned to be more than just a passenger liner. The RMS in the ship’s official name, RMS Titanic, stands for Royal Mail Ship. The Titanic was under contract with the Royal Mail Service and the United States Post Office. Like most other Titanic facts, the amount of mail the ship carried was huge. Get ready for another exclamation point…there was over 25,000 cubic feet of storage on the ship for mail, letters and parcels alone!

The Titanic was almost like a floating city. The ship generated as much electricity as a city at the time. Like any other city, the Titanic had its own post office. The Sea Post Office on the Titanic had five postal clerks who worked seven days a week sorting mail. There was so much mail, that they sorted up to 60,000 pieces each day!

6. There Were Only Enough Lifeboats for 1,178 People on The Titanic 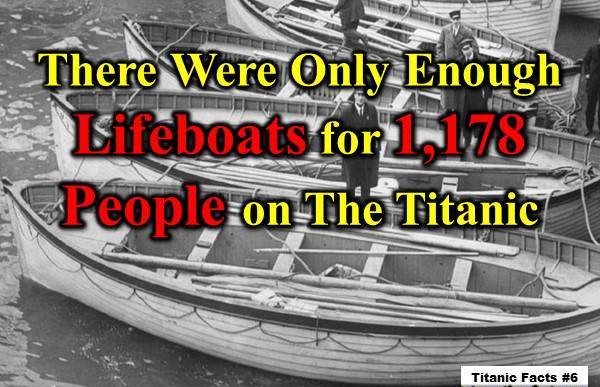 Of all the Titanic facts, this one tells us the most about what happened on the fateful day of the sinking of the Titanic. The Titanic had the capacity to hold over 60 lifeboats. With 16 sets of davits that could each handle four lifeboats, the ship could hold exactly 64 lifeboats. Get ready for some more math…with each lifeboat capable of holding 65 people, these 64 lifeboats would have been enough to carry the roughly 3,500 passenger maximum capacity of the Titanic.

It’s a sad Titanic fact that the Titanic wasn’t even at full capacity on its maiden voyage. It had only 2,223 passengers and crew when it sank, yet it still did not have enough lifeboats. Although the Titanic could hold over 60 lifeboats, there were only 20 lifeboats in total. There were 14 standard lifeboats, each capable of carrying 65 people, four more collapsible lifeboats that could carry 47 people each, and two emergency cutters that could carry 40 people each. Don’t put your calculator away…that means the Titanic only had enough lifeboats for 1,178 people!

And that’s why the sinking of the Titanic became such a tragedy. On the night of the RMS Titanic’s sinking, there simply weren’t enough lifeboats to save everyone on the liner.

7. 1,045 More People Could Have Been Saved on the Titanic 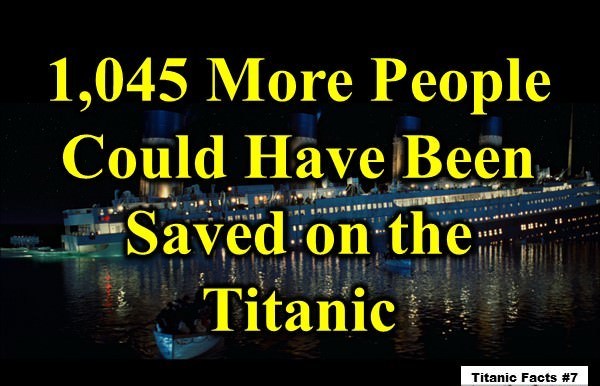 This is possibly the most controversial of the Titanic facts. There was another ship charting the ice-filled waters of the Atlantic on that fateful night, the SS Californian. The Californian warned the Titanic of pack ice via the early wireless communication system the ships employed. It was April 14th, 1912, and the Californian stopped for the night to avoid hitting any icebergs, and cautioned the Titanic to do the same.

The Titanic’s wireless operator criticized the Californian for being too cautious. Perhaps it was all the boasting at the time of the ship’s construction. Maybe it was the legendary and historic name of the ship. Whatever the case, the Titanic took no such precautions. After the Titanic struck the iceberg, the crew launched flares to attract the attention of nearby ships.

The SS Californian saw the flares, but did not take action. The captain of the Californian instructed his crew to send Morse code signals via lamp. He then went to sleep, telling his crew to inform him if the other ship responded to any signals. It’s likely the Titanic was simply too far way to see the signals.

It was early in the morning on the following day that the Californian finally tried to reach nearby ships using its wireless system. The crew soon learned what happened and went to try and help rescue the passengers of the Titanic, but it was too late and another nearby ship, the Carpathia, had already picked up any remaining survivors. The Californian was closer than the Carpathia to the Titanic. Had they responded with wireless instead of Morse lamps, they may have been able to save more passengers. While the number of lifeboats was not enough to save the passengers, there may have been enough to ferry everyone safely to the sanctuary of the Californian.

8. It Took Over 70 Years for the Titanic Wreck to Be Found 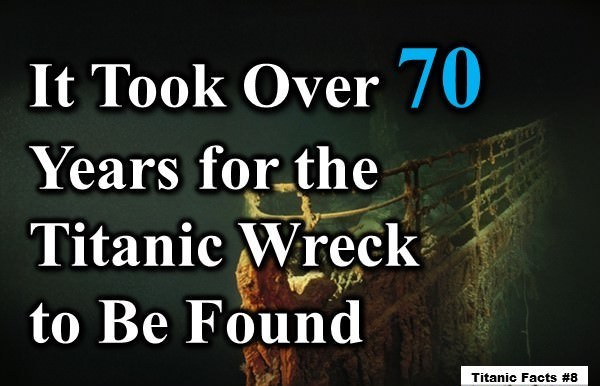 It wasn’t until 1985 that the wreck of the Titanic was found. Shortly after this, more Titanic facts began to emerge. It had long been debated whether the Titanic had sunk in one piece. One of the passengers of the Carpathia described a scene that was illustrated, showing the Titanic breaking in half before sinking. It was never a proven Titanic fact, until the wreck was found.

In September of 1985, a team of French and American explorers succeeded in finding the wreck of the Titanic. The Titanic had broken in two, and more facts about the Titanic were to be confirmed. The team showed that the Titanic had sunk more than 13 miles from the coordinates provided by the wireless operators on the ship. 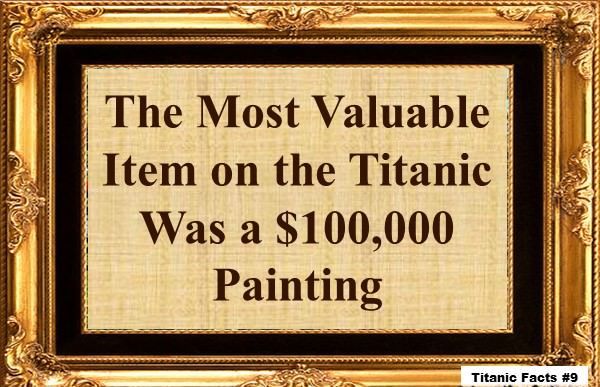 Despite rumors, one fact about Titanic that’s really a myth is that there was a lot of gold on-board. The most expensive item, according to filings after the sinking, was a $100,000 painting. It’s ironic that many years later, some of the items retrieved from the Titanic have gained value because of the huge cultural meaning the ship has.

Most of the items held in the Titanic’s cargo were everyday things — food, furniture, and even some automobiles. The wreck has been declared a world heritage site to prevent anyone from taking any further items for their own commercial gain. 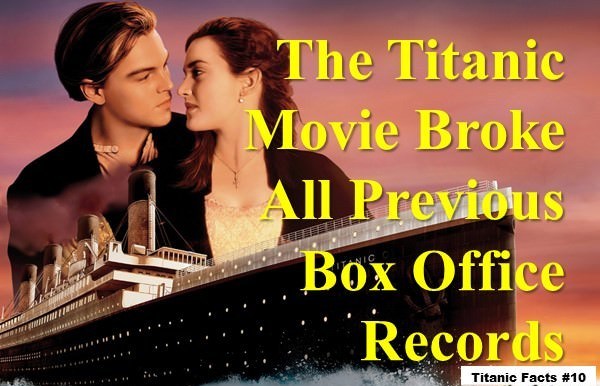 Perhaps it’s because of the huge boasts of the Titanic as the ‘unsinkable ship’ and then its tragic sinking. Even to this day, kids and adults from all over the world find Titanic facts compelling. The film Titanic, directed by James Cameron and starring Leonardo DiCaprio, is possibly the most well known of the many stories and movies relating to the great liner.

The movie does not contain a lot of new Titanic facts, as it is a drama and not a documentary. However, it’s clear that James Cameron researched a lot of Titanic facts when he made the film. All the sets were made to be exact recreations of the ship, and the timing of the events during the sinking were taken from eyewitness accounts.