Check out this awesome range of puffer fish facts and learn more about this interesting creature and its mind blowing abilities.

Fish have been on planet earth for more than 500 million years, and there origin is more ancient than dinosaurs. There are more than 25,000 fish species and Puffer Fish is one of the awesome fish species on this planet.

They come in a wide verity of different colors with many different markings.

The diet of the this fish consists mainly of invertebrates. Larger species will often crack open and can eat hard shells with their hard beaks. Their beak is actually a combination of 4 teeth that have been fused together.

You should also read: Panther facts

A very unique puffer fish facts show that,  it do not have scales and their skin is thick and rough. Some species have spikes on their skin which offers additional protection against predators.

The main feature of the puffer fish is their ability to adjust large amount of water and sometimes air inside them, which increases their body shapes and turns them into the larger sea creatures. Their body grows on average of 3 times their normal size. 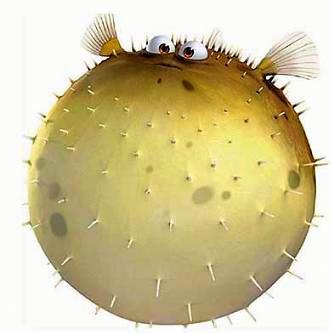 Most puffer fish contain a toxin called “Tetrodotoxin”. This toxin is extremely deadly to other sea creatures and is also deadly to humans. There is enough poison inside a large puffer fish to kill up to 30 adult humans and there is no known antidote.

Tetrodotoxin is up to 1200 times more poisonous than cyanide. Even if a predator eats it, they will still get poison. Sharks are the only species having great immune system to the toxin, they can eat puffer fish without any negative consequences.

Here is a list of most interesting Puffer Fish Facts that you should learn to gain more knowledge about this cute and deadly creature.

If all these puffer fish facts were interesting to you then i prefer you to read: Amazing Facts about China