Obesity facts tell a troubling story about the rise of obesity in America. Childhood obesity facts teach us that 1 in 5 teenagers or young adults are obese. Obesity seems to become more prevalent with age, although elderly people tend to be slightly less obese on average. More than 1 in 3 adult Americans is obese according to some studies.

There are clear indications that ethnicity plays a role in obesity. However, the picture is very complex, with income and education also impacting the obesity rate of different groups in various ways. On the whole, minorities and lower-income people are more at risk of being obese.

With obesity costing the United States $254 billion per year, it’s a national problem that affects every industry. Obesity-related diseases have taken a huge toll on the healthcare industry. Recent efforts have been aimed at building public support, and getting health insurance companies to share more of the financial burden of obesity. 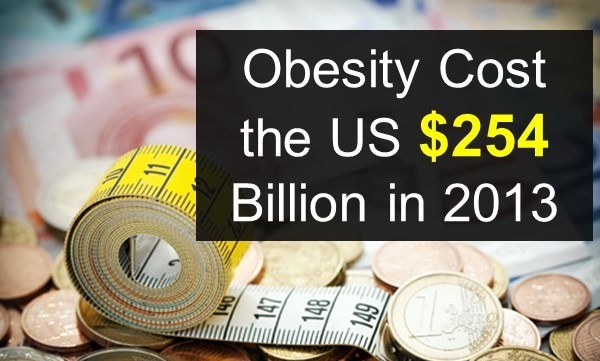 A large proportion of the total financial cost of obesity is spent treating the conditions related to obesity. Treatments for obesity-related conditions such as heart disease, stroke, type 2 diabetes, and certain types of cancer, account for the highest medical costs associated with obesity. It’s truly one of the more shocking obesity facts that obesity in America costs our country this much money – over $250 billion in one year!

One positive way to look at these economic obesity facts is as follows: when we reduce obesity we also improve our economy. This should be additional motivation for improving nutrition in our schools and in our home lives. 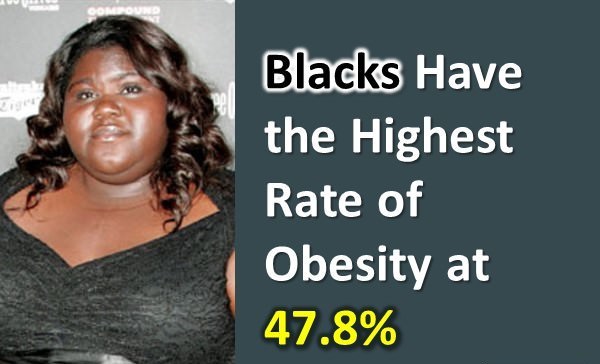 Obesity facts tell us about the way obesity affects different ethnic groups. Blacks have the highest rate of age-adjusted obesity, at 47.8%. This is one of the most shocking facts: nearly half of all black people in the United States are obese.

Hispanics have the second highest rate of obesity at 42.5%. Next are whites, with 32.6% of white people being obese. The ethnic group in the United States who are least likely to be obese are Asians, who have only a 10.8% rate of obesity.

It’s a common myth that these differences are a result of variations in income. While low-income people are generally more vulnerable to obesity, obesity facts tell us that the picture is more complex. Income and obesity don’t line up directly as we might think. For instance, higher-income black and Mexican-American males are more likely to be obese than their low-income counterparts. Gender adds another layer of complexity. For instance, obesity facts tell us that higher-income women are less likely to be obese than lower-income women.

3. 1 in 5 American Teenagers are Obese 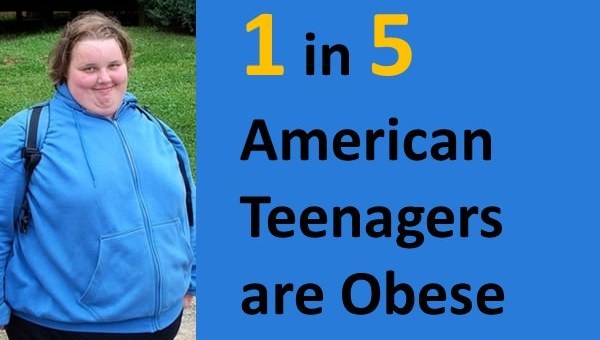 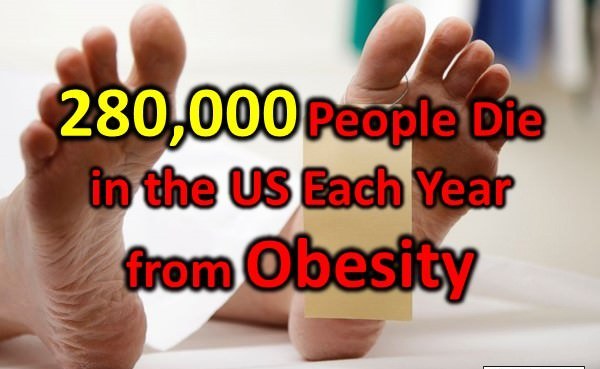 The exact number of deaths that can be attributed to obesity is one of the obesity facts that is most difficult to determine. Scientists have struggled to know exactly how to answer the question of whether or not someone has died as a direct result of obesity.

The method for determining whether someone is considered obese or not is based on body mass index or BMI. BMI is the ratio of your height to your weight. This ratio is used by most scientists to establish obesity facts. Put as simply as possible, having too much weight for your height is what makes you obese.

5. In 2013 the AMA Classified Obesity as a Disease 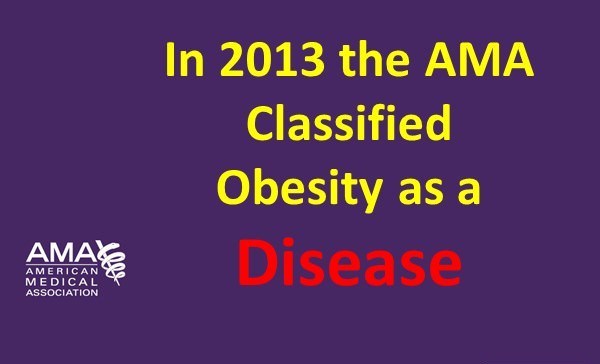 The rate of obesity in America has reached such high levels that the American Medical Association (AMA) has now classified obesity as a chronic disease. By making this decision in 2013, the AMA’s hope is that health insurance companies will take a greater share in the burden of caring for people who are obese.

With the United States’ obesity bill topping $250 billion each year, there are many costs to be covered. Health insurance companies still reserve the right to deny claims because the AMA classification is not a legal ruling.

The hope of classifying obesity as a disease is that there will also be greater public awareness of obesity. Obesity facts teach us that obesity affects people of all income levels in all ethnic groups. Working together, we can find better cures for obesity, including improved surgery, counseling and better medication to treat obesity. Hopefully, obesity facts will one day become a thing of the past. 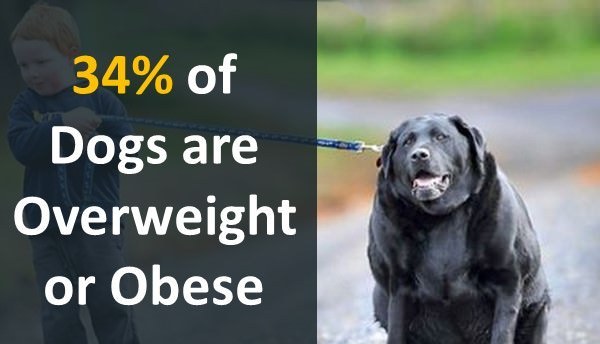 According to obesity facts, we’re not the only ones who are overweight – our pets are, too! A little over 34% of adult dogs handled by private veterinarians in the United States are overweight or obese. Studies show that this varies by gender, although female and male dogs that are spayed and neutered are more obese on average than their intact counterparts.

Of the different breeds of dogs studied, obesity facts tell us that German Shepherds are the least likely to be overweight or obese. Shih Tzus and Poodles also tend to keep a trim figure. Dogs who eat homemade foods are more likely to be obese than dogs that eat canned food. This is perhaps one of the surprising obesity facts: we might have assumed that canned food was worse than homemade food for dogs. At least when it comes to obesity, canned food is better for your dog’s health!

7. The Extra Weight Of Obesity Costs Airlines $275 Million Per Year 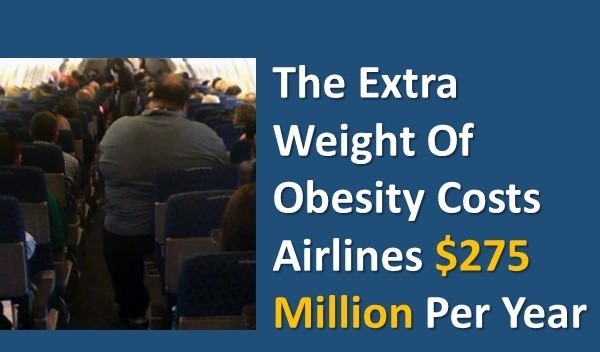 Obesity takes a toll on our economy in many ways. Our obesity facts tell us that airlines are under strain from obesity. They have to make seats wider, reducing the number of people who can fit on an aircraft. An airplane also uses more fuel when it’s carrying more weight. All this adds up to over a quarter of a billion dollars more that airlines have to pay each year due to obesity.

The healthcare industry also bears a large burden. Obesity facts tell us that there are medical expenses In addition to the increased costs of caring for patients with obesity-related diseases. Hospitals have to install special equipment for dealing with severely obese patients. Ambulances also need to be upgraded to deal with such patients.

8. 93 Million Americans are Affected by Obesity 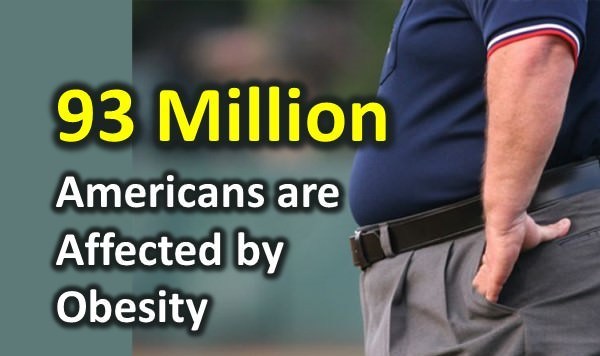 Obesity in America facts teach us that obesity is a growing problem in children and adults. With the AMA classifying obesity as a disease, public efforts are beginning to address the problem. Diet, genetics and environment all play a role in the causes that lead to obesity.

It’s clear that starting to address the issue of obesity with children makes a difference. Children who are obese are 70% more likely to be obese as adults. By teaching better nutrition and healthier lifestyle practices, we can change these trends.

One of the most troubling obesity facts is that two out of three Americans are overweight or obese! It’s a huge problem in the United States, and around the world. Only recently – in 2013 – Mexico became the first country with a higher obesity rate than the United States.

9. 27% of Adults Are Too Obese to Serve in the Military 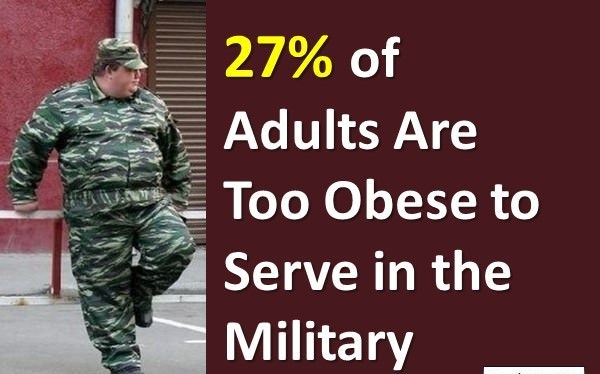 Obesity facts also tell us about the impact that obesity has on the military. Nearly 1 in 3 adults are too obese to qualify for military service. In 2005, 9 million people were considered too obese to serve in the United States Armed Forces. Obesity is currently the single biggest reason for discharge from the military.

Obesity is also a growing problem within the armed forces. It’s estimated that 16% of people in the military are obese. In 2008, nearly 35% of eligible women were classed as too obese to serve, and nearly 12% of male civilians were too obese to qualify. 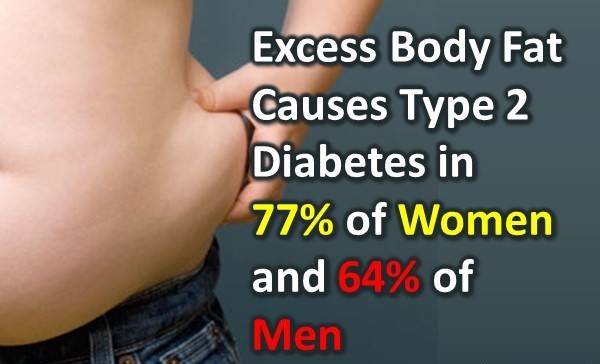 Obesity affects the body in two main ways. Obesity facts tell us that the excess weight of obesity can cause sleep apnea and arthritis, as the bones and lungs are put under increased pressure from too much weight. This is the first way that obesity takes its toll on the body. The second way that obesity impacts the body is through the excess of fat cells and the impact they have on the liver. Excess fat cells also lead to cardiovascular disease and cancer.

Nearly every major organ in the body is negatively affected by obesity. Obesity facts show that obesity has an impact on the pancreas, the kidneys, the gallbladder, and the colon. Obesity can also lead to complications during pregnancy, including birth defects and, in extreme cases, fetal death. It’s clear that obesity is hazardous to your health.