Rosa Parks facts can teach us a great deal about The Civil Rights Movement. Parks was a civil rights activist who became a symbol for Blacks struggling for equal rights in the Southern United States in the 1950s and 1960s.

The most well-known of the Rosa Parks fun facts is that she was arrested for refusing to give up her bus seat to a White person in Montgomery, Alabama. Her case drew national attention and she became a symbol of The Civil Rights Movement.

It’s not often than famous historical facts center on someone’s arrest. However, Rosa Parks became a symbol of the struggle for freedom because she was arrested for her actions. Interesting facts about Rosa Parks reveal the unjust laws that led to her arrest, and the efforts to change the laws. 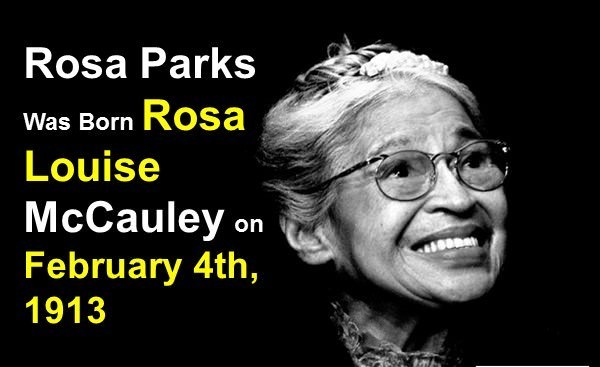 Rosa Parks moved with her mother and younger brother to her grandparents’ farm outside of Montgomery, Alabama. One of the most inspiring facts about Rosa Parks is that she took whatever education she could. In the Southern United States at the time, there were laws that segregated Blacks and Whites. These laws included the requirement for Blacks and White to attend separate schools, and to use separate areas in public facilities. The laws were called Jim Crow laws.

Under the Jim Crow laws, Black schools did not receive the same level of funding as White schools. Rosa Parks attended rural schools, and took academic and vocational courses at The Montgomery Industrial School for Girls. Rosa Parks sought as much education as she could, despite the segregation that limited the educational resources that were available to her.

Parks started secondary education but had to stop after her grandmother, and then mother, became ill and required care. It’s another one of our inspiring Rosa Parks facts and a great fact for kids that Rosa Parks temporarily put aside her own education to care for her family.

In 1932, she married Raymond Parks, a barber from Montgomery, Alabama. After getting married, Rosa Parks went back to school and completed her high school degree. At the time, less than 10% of Blacks in the United States had a high school diploma. This is one of the amazing facts that shows her persistence. When Rosa Parks had the opportunity, she resumed her education.

2. Rosa Parks’ Husband Raymond Parks Was a Member of the NAACP 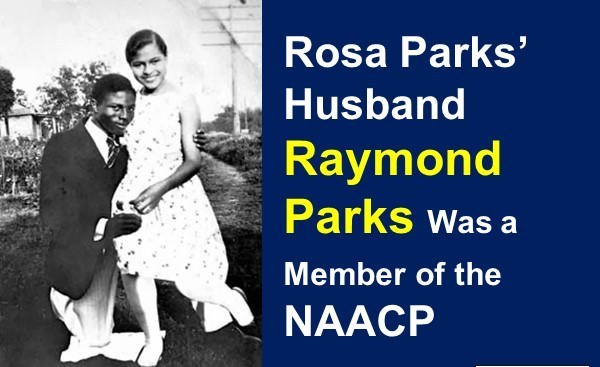 Rosa Parks’ husband, Raymond Parks, was a member of the Montgomery chapter of the National Association for the Advancement of Colored People (NAACP). NAACP was formed in the 1900s to help further the cause of Blacks in America. In the Southern United States, NAACP was one of a number of groups working for more equal rights for Blacks. This is one of the Rosa Parks facts that teaches us about The Civil Rights Movement.

3. Rosa Parks Was The Secretary of the Montgomery, Alabama NAACP 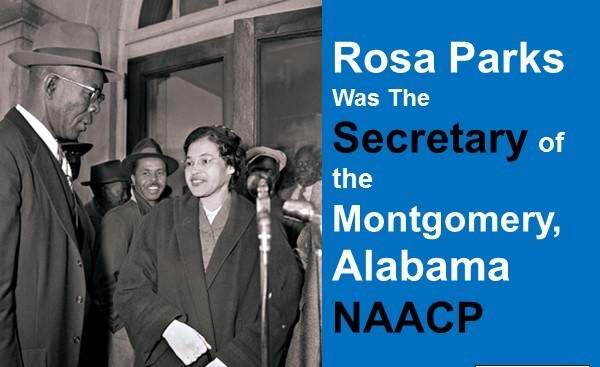 One of the surprising Rosa Parks facts is that she was involved in civil rights work long before she refused to give up her seat on a bus to a White a person. In 1943, Rosa Parks became the secretary of the Montgomery, Alabama chapter of the NAACP.

Rosa Parks was the only female member of the chapter at the time. It’s one of the inspiring facts that she was also a feminist working for equal rights for all people, regardless of race or gender.

In her role as secretary, Rosa Parks helped raise awareness for civil rights cases in Alabama. Parks and her local NAACP chapter earned nationwide recognition for their efforts to help Black people who were suffering under Jim Crow laws and cultural racism. 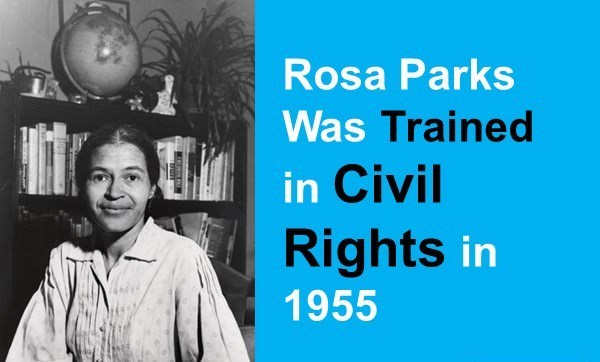 The Civil Rights Movement was beginning to gain momentum in the 1950s, and more Rosa Parks facts are known from this time. In 1955, Parks was trained at the Highlander Folk School in civil rights activism. The school, located in Tennessee, also trained Martin Luther King, Jr. and other important members of the civil rights movement. 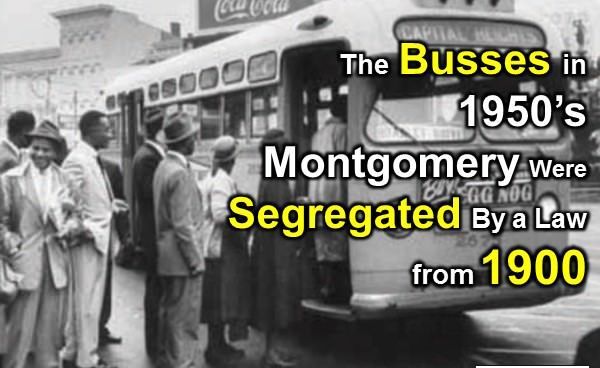 This is another one of the amazing facts that tells us about the time in which Parks lived. The busses in Montgomery, Alabama had been segregated since 1900. The segregation law was unfair and was enforced rather arbitrarily.

There was an area at the front of the bus that was designated for Whites only. Blacks were not allowed to sit in this area, or even across the aisle from Whites! Bus drivers were given the responsibility of enforcing the segregation law. The drivers had a movable sign that was used to indicate the colored section.

When the White area of the bus filled up, the bus driver would move the sign to designate more rows of the bus as White only. Any Black people seated in those rows would have to get up from their seat and move back to another seat to let White people sit down.

These unfair laws had long frustrated Black people. It’s one of the Rosa Parks facts that she never liked the unfair laws. She said that her feelings had existed for some time before the fateful day that she refused to give up her seat. 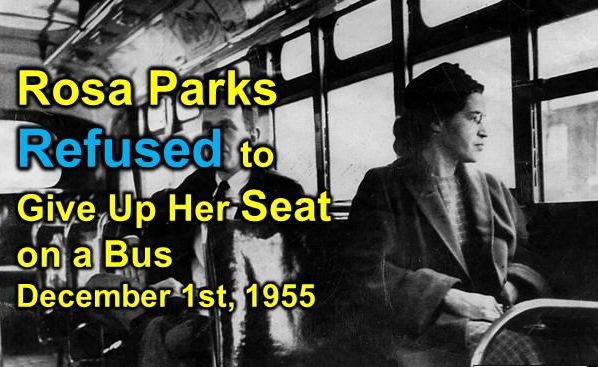 On December 1, 1955, Rosa Parks got on a bus at the end of the day. She had finished a day’s work and was on her way home. She paid for her ticket and then sat in the first row of the section for Black people on the bus.

The bus made a few stops and picked up more passengers. The bus driver saw that White passengers were standing and that the section for White people on the bus was full. He moved the sign for the colored section further back, and asked the Black people sitting nearest the front to move so White people could sit down.

Rosa Parks established many interesting facts herself! After the event she made it quite clear that she wasn’t tired or old; she has simply refused to give up her seat because she didn’t think the laws were fair. She said that she was “tired” of unfair treatment!

What Rosa Parks committed was an act of civil disobedience. She broke the law of segregation on busses to call attention to how unfair the law was. It’s one of the inspiring facts about Rosa Parks to know that she was well aware of what she was doing. Rosa Parks was consciously acting to make the laws more equal for all people.

7. She Was Chosen by Edgar Nixon and MLK, Jr. to Be a Symbol 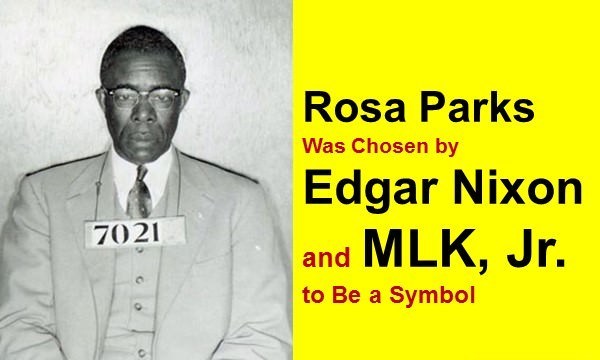 The most well known of Rosa Parks facts may have been the single most important act of The Civil Rights Movement. While Rosa Parks wasn’t the first Black person to refuse to give up her seat on a bus and be arrested for it, her case was chosen to be a symbol for the Black struggle for equal rights.

After she was arrested, Parks was bailed out the next day by Edgar Nixon, the president of the local NAACP chapter where Parks was secretary. Nixon met with other civil rights leaders and they decided that Parks’ case was worth making a symbol. Rosa Parks was chosen because she was a well-educated responsible citizen.

People looked up to Rosa Parks and she had a dignified air about her. It’s another of the inspiring Rosa Parks facts for kids that Parks was chosen to challenge authority because she was a responsible and hard-working person and she challenged unjust laws in a non-violent way.

8. She Sparked a Boycott that Ignited the Civil Rights Movement 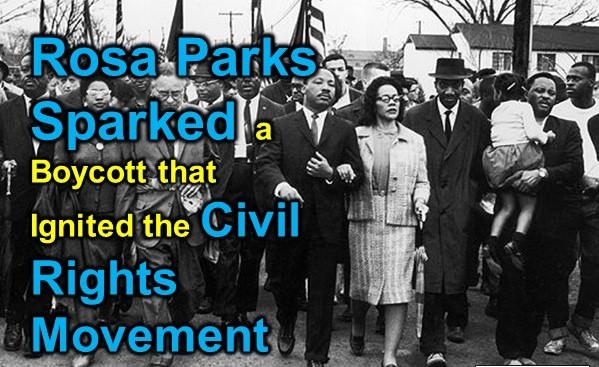 The civil rights leaders in Montgomery, including Martin Luther King, Jr., announced the Montgomery Bus Boycott in response to Rosa Parks’ arrest and the unjust laws. Martin Luther King, Jr. would play an important role in organizing and planning the boycott. The boycott of the busses in Montgomery, Alabama, was an act of non-violent protest against the system of injustice perpetuated by the Jim Crow laws.

Eventually the Montgomery Bus Boycott became one of the first major victories in The Civil Rights Movement. The laws in Montgomery that segregated busses were judged to be unconstitutional.

People are interested in Rosa Parks facts because her act sparked the bus boycott in Montgomery, Alabama. The victory from the bus boycott then sparked the wider movement for equal rights in the Southern United States. It’s one of the great facts that one person can make such a difference with one simple act.

9. Rosa Parks’ Case Was Not the Case That Desegregated the Busses 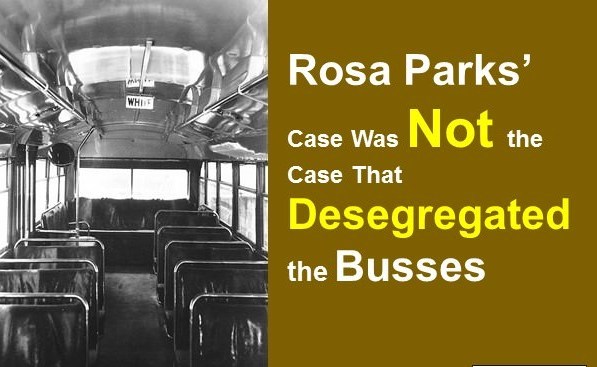 Rosa Parks was found guilty and fined for refusing to give up her seat on the bus. Parks appealed her case and claimed that the laws that enforced segregation on busses were unconstitutional.

It’s another of the surprising Rosa Parks facts that it was not her appeal that succeeded in the changing the laws in Montgomery. People who had been arrested before Rosa Parks filed a case, Browder v. Gayle, that was already in the court system. To add Parks to the case would have put the case in jeopardy. Waiting for her appeal to make it to the Supreme Court would take too long. The boycott was held to convince the government or the courts to change the segregation laws sooner.

The boycott continued and bus companies were losing money. She had paid for her seat on the bus, which is part of the reason why the laws were so unjust. Rosa Parks and the other people who were appealing the segregation laws had paid their fair share like everyone else and deserved equal treatment.

10. The Busses in Montgomery Were Desegregated on December 20th, 1956 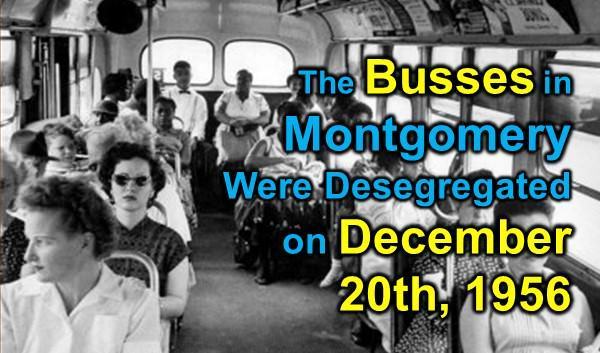 On June 13, 1956, the District Court of the United States decided that the segregation laws on the busses in Montgomery were unconstitutional. On November 13, 1956, the decision was upheld by the United States Supreme Court. Finally, on December 20, 1956 the busses in Montgomery, Alabama were desegregated, a little more than a year after Rosa Parks refused to give up her seat. Rosa Parks and the Montgomery Bus Boycott were successful!

Rosa Parks was a responsible hard-working person who was tired of doing her part for society and not receiving equal treatment. It’s one of the more surprising Rosa Parks facts that Parks was a civil rights activist before she refused to give up her seat on a bus.

Rosa Parks knew what she was doing and acted in a peaceful manner to challenge unjust laws. As a result, Rosa Parks became a symbol of the struggle for equal rights and helped launch The Civil Rights Movement that would eventually result in The Civil Rights Act of 1964.