1. Cristoforo Colombo is the Real Name of Christopher Columbus 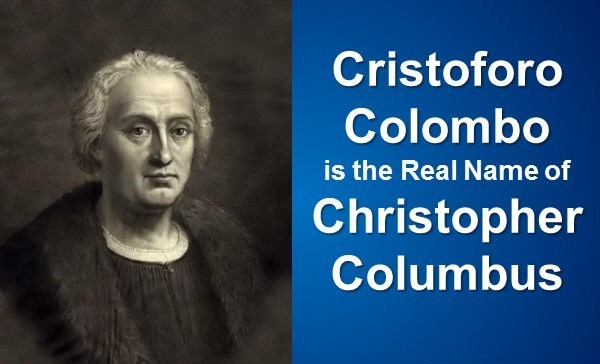 Christopher Columbus’ father was named Domenico Colombo and was a middle-class tradesman. Columbus was born sometime in October of 1451 in what is now part of Italy. The exact date and location of Columbus’ birth are disputed.

One of biggest barriers to establishing Christopher Columbus facts is that he lived 500 years ago. Columbus was not from any significant lineage. He wasn’t directly related to any kings or queens, and precise records of births and deaths weren’t recorded for everyday people at the time.

2. Christopher Columbus Traveled to England When He Was 25 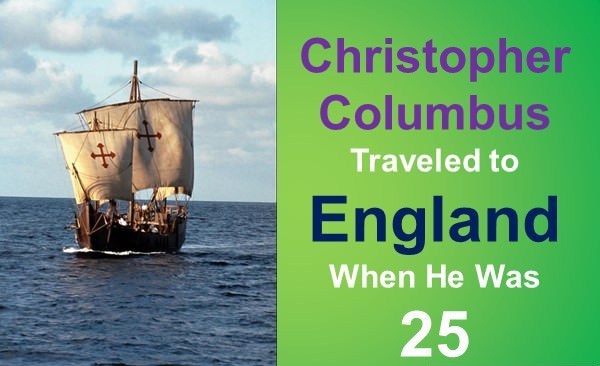 Christopher Columbus sailed on many voyages from the time he was 20 years old until his fateful voyage in 1492, when he crossed the Atlantic. Columbus started his career as a business agent, traveling and trading goods on behalf of the wealthy families in Italy at the time.

When Columbus was 25 to 26 years old, he traveled to England and Ireland from Italy. One of the important Christopher Columbus facts to remember is that voyages by sea were very different 500 years ago. What we might consider a small journey now was quite an undertaking in those days.

Sea voyages in the late 1400s and early 1400s lacked many of the modern day conveniences we have now. It took a steadfast individual to deal with poor nutrition, illness, rough weather and many days away from land. Based on his many sea voyages, one of the clear Christopher Columbus facts is that he was a steadfast person who could stand up to the rough life at sea.

3. Christopher Columbus Moved from Italy to Portugal in 1477 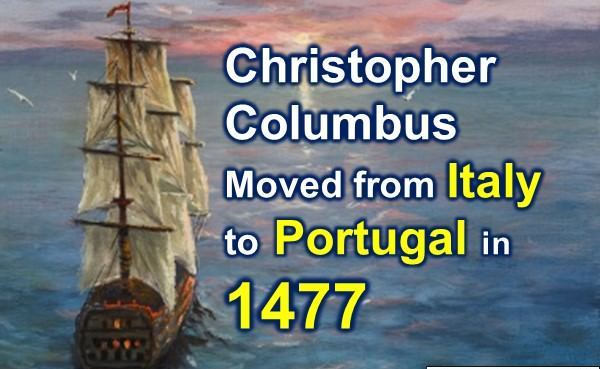 Portugal lies on the Atlantic coast of the Iberian Peninsula and offers an ideal place to set sail for the British Isles, the African Coast and the Mediterranean. For a seafaring trader like Columbus, Portugal was an excellent place to live.

In 1477, Columbus sailed to Lisbon where he met his brother Bartholomew, or Bartolomeo, and continued to work as a trader for wealthy merchant families. Columbus soon settled in Lisbon, Portugal. He married Filipa Moniz Perestrelo and some time in 1479 or 1480, his son Diego Columbus was born. 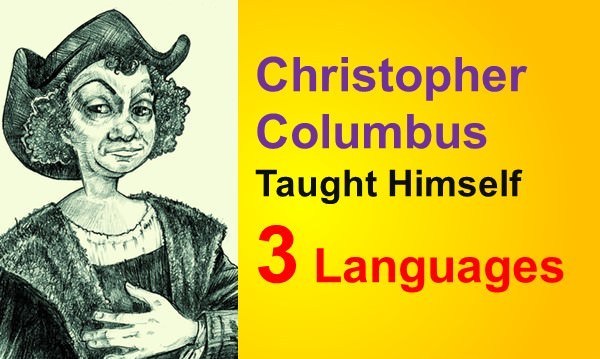 Columbus taught himself three new languages: Latin, Portuguese, and Castilian. Like Benjamin Franklin and Abraham Lincoln, Columbus read many books. He read books by Marco Polo, the adventurer; Ptolemy, the astronomer; and Pliny, the philosopher.

As Columbus read, he would often take notes in the margins of the books. We would laugh at some of his observations today because science and knowledge have advanced so much in the last 500 years. However, one of the clear Christopher Columbus facts is that Columbus wanted to learn as much as possible about the world around him. Perhaps it was this desire to learn more about the world that gave Columbus the inspiration to cross the Atlantic.

5. Christopher Columbus A Book on the Apocalypse in 1501 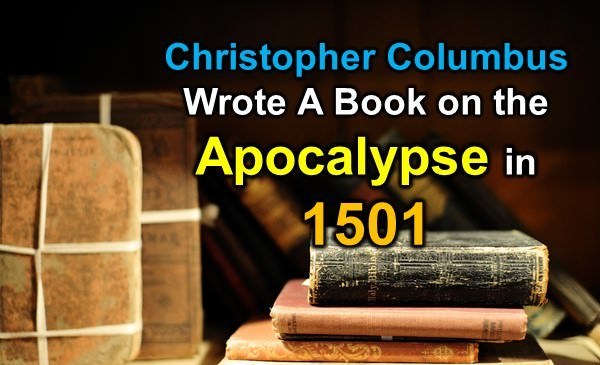 Columbus studied the Bible intensely, along with the other books that he read. Like Martin Luther King, Jr., Columbus often quoted the Bible in his writings.

Possibly one of the least known Christopher Columbus facts is that he published a book of religious writings at the end of his lifetime. In 1501 and 1502, Columbus wrote The Book of Prophecies, a collection of apocalyptic religious writings. These sorts of works were common during the late Middle Ages, or medieval period of time. 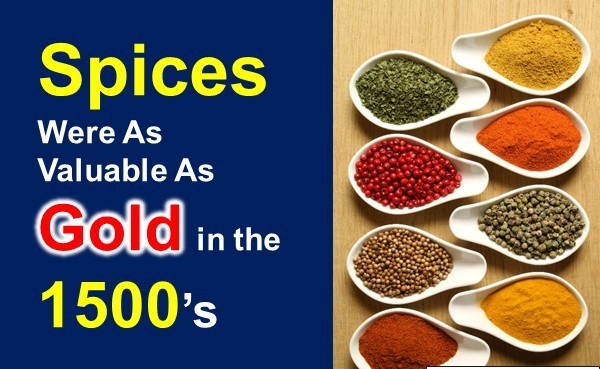 File this one under economic Christopher Columbus facts: spices, which came mostly from Asia, were a highly valuable commodity in the late 1400s and early 1500s. The trading and transport of spices was conducted along the Silk Road from India and China to Europe.

Spices were not as common in Columbus’ time as they are today. To have spices for your meal was a sign of nobility or luxury. People who owned spices kept them locked up in chests with keys, treating them with equal value as gold.

The Turkish Empire conquered Constantinople and established rule. The Turks installed their government and changed the name of this important city on the Silk Road to Istanbul. After the Turkish Empire took control of Constantinople in 1453, there was a traffic jam on the Silk Road. The passage of goods was no longer as easy as it had been, and the high value of spices gave traders an economic incentive to look for a detour.

Many people wondered whether there was a way to go around the Silk Road. People began looking for an ocean route to the source of the spices in Asia. Wealthy merchants and royal families funded the expeditions of sailors like Columbus. Whoever discovered the ocean route first would have exclusive access to the spices at lower prices. For the wealthy merchants and royal families, funding sailors like Columbus was an investment. The source of the spices was in and around what is now modern day India. At the time, the Europeans referred to this area as the Indies. 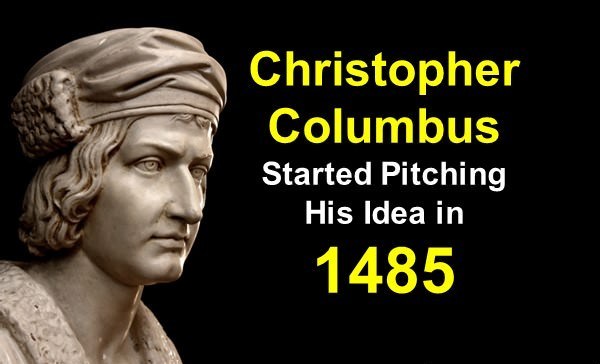 As early as 1485, Columbus had approached John II, the King of Portugal, for funding to search for an ocean route to the Indies. Columbus had a radical idea, which was to travel west to reach the Indies in the east. At the time, it was not commonly known or widely accepted that the Earth was round. This is one of the best-known Christopher Columbus facts: Columbus believed the Earth was round but people thought his idea was ridiculous.

You should also read: Interesting Facts about William Shakespeare

Whether people believed the Earth was round or not, it isn’t one of the surprising Christopher Columbus facts that people thought his idea was a long shot at the time. What made his plan so daring was the distance Columbus would have to travel. The people who doubted Columbus were in fact right, and he underestimated the circumference of the Earth.

Until the Suez Canal was built, Dias’ route would be the fastest ocean route to Asia from Europe. However, what Columbus discovered would turn out to be far more valuable than the spices of the Indies.

8. King Ferdinand and Queen Isabella of Spain Were Venture Capitalists 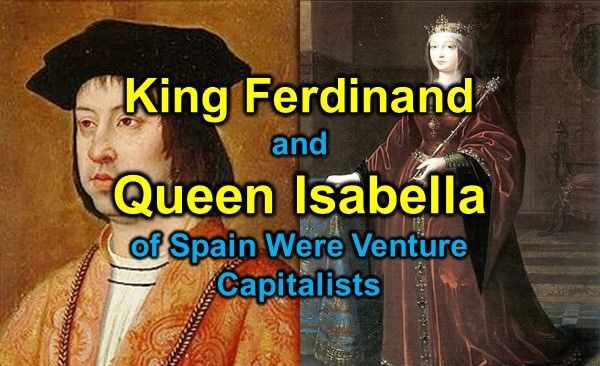 By 1492, Columbus had tried to gain support from merchants in Italy and the King of Portugal for his plan to travel west to reach the Indies. It’s one of the much less known Christopher Columbus facts that Columbus also sent his brother Bartholomew to seek help from the King of England. Wherever he tried, no one was interested.

Finally, Columbus received a reception from the King and Queen of Spain. King Ferdinand and Queen Isabella had recently married and controlled a large amount of territory in Spain. It’s another of the little known Christopher Columbus facts that Columbus presented his idea to the monarchs as early as 1486.

A committee of advisors who worked for Isabella reviewed Columbus’ idea and said that he had underestimated the circumference of the Earth and how long it would take to reach Asia by traveling west. Ferdinand and Isabella took the advice of their committee and did not give him funding for a voyage. Columbus must have made an impression, however, as King Ferdinand and Queen Isabella gave Columbus an annual salary and lodging.

It wasn’t until 1492 that King Ferdinand and Queen Isabella agreed to fund Columbus’ voyage. Another of the inspiring Christopher Columbus facts is that he worked tirelessly to gain support for his idea. Other people did not believe him, and he may have been wrong, but he continued to work hard for what he believed in. It took the skill of a diplomat and the showmanship of a salesman to convince the King and Queen of Spain to fund his voyage.

9. Christopher Columbus Was Not the First to See Land in 1492 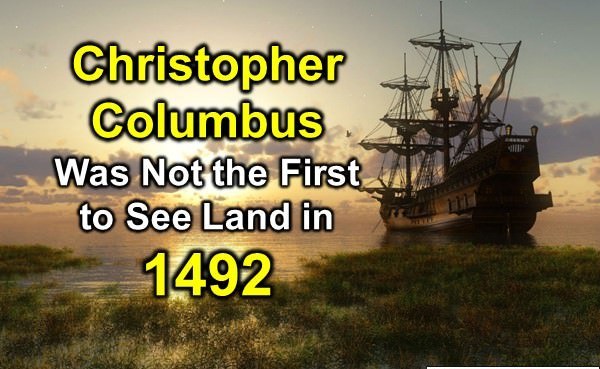 “In 1492, Columbus sailed the ocean blue”, is one of the most repeated Christopher Columbus facts. Columbus departed from Spain on August 3, 1492. Many people were uncertain that he would return.

Columbus’ voyage consisted of three ships: the Niña, which was the nickname of the Santa Clara, the Pinta, and the Santa Maria. It was a lookout on the Pinta who first saw land on October 12, 1492, and alerted the captain of the Pinta, who signaled Columbus on his ship. He later claimed that he was the first to spot land a few hours earlier. Columbus not telling the truth about who saw land first is one of the first disheartening Christopher Columbus facts to emerge.

Columbus discovered more than land – he met people he had never seen before. These were the Native Americans, or the indigenous people who lived in the Caribbean. Another one of the disheartening Christopher Columbus facts is that he immediately thought to colonize the lands and the inhabitants.

Columbus took many of the native people he encountered prisoner. The native tribes he met were mostly peaceful, except for one group that resisted. Columbus was a sea faring trader and his goal was to ensure the economic success of the voyage. He found gold among the native people and tried to learn where they had gotten it. This was the beginning of poor treatment of the native people by Columbus and later explorers who would follow him.

10. Columbus Made 4 Trips Across the Atlantic to the Americas 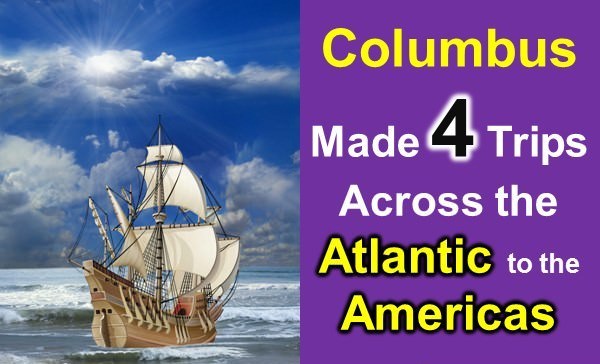 Columbus insisted that he had landed in the Indies, naming the inhabitants Indians. To this day the Caribbean is also known as the West Indies. While many people know that Columbus landed in the Americas in 1492, it’s one of the lesser-known Christopher Columbus facts that he made three more trips to the New World.

The New World was the name given to the area that Columbus had discovered. This area is what we now know as the Americas: North America, Central America, and South America. As luck would have it, Columbus landed right in the middle, near Central America.

Although Columbus insisted it was the Indies, there were strange new plants and animals, and the customs of the native people were unknown. This led people to call the land he discovered the New World. After Columbus discovered the Americas, an era of exploration and colonization began that would forever change life on Earth.

Columbus made three trips, with his final trip in 1503. When agreeing to fund the voyage, King Ferdinand and Queen Isabella had promised that Columbus would be governor of any new lands that he discovered. Recent studies have revealed some of the most shocking Christopher Columbus facts. For example, in 1500, Columbus was arrested and taken back in chains from the New World for his tyranny as governor.

The brutal treatment of people by Columbus when he was governor is one of the saddest Christopher Columbus facts because it changes the nature of his legacy. We no longer see Christopher Columbus as an inspiring figure. Perhaps the saddest fact is that this type of brutality would characterize the way European settlers treated native people in the Americas in the years to come.