1. Argentina Was Named for a Fabled Mountain Made of Silver

The name Argentina comes from the Latin word for silver, argentum. The area that would later become Argentina was rumored to be rich in silver. There was a legend among European colonialists that there was a mountain made of silver in Argentina.

In 1826, during the Argentine Civil Wars, the Constitution of Argentina was created. Although it did not last very long, this early constitution was one of the first appearances of the name Argentina in official documents.

This is one of the interesting Argentina facts because the name is a Spanish word that was adopted from Latin to refer to the country. Then, the English name for the country was taken from the Spanish reference. 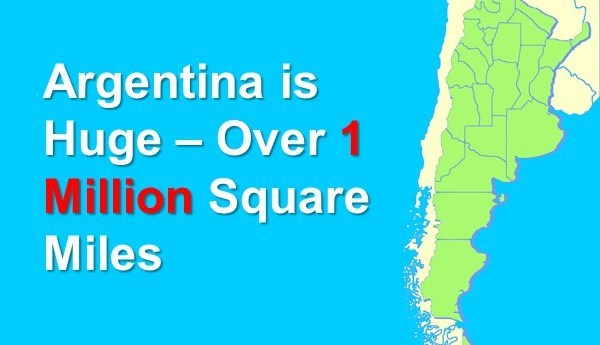 Argentina also has a large population. With over 40 million people, Argentina is the 32nd largest country in the world by population, and the third largest in South America. Buenos Aires is the capital of Argentina, and is the country’s most populated city, with over 3 million people.

3. This Country is the Largest Spanish Speaking Country in the World 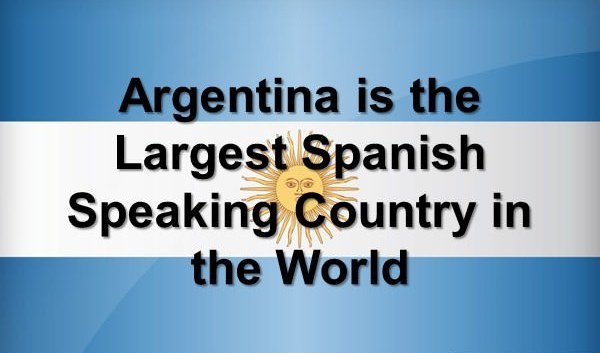 4. 200 Countries Have a Greater Population Density than Argentina 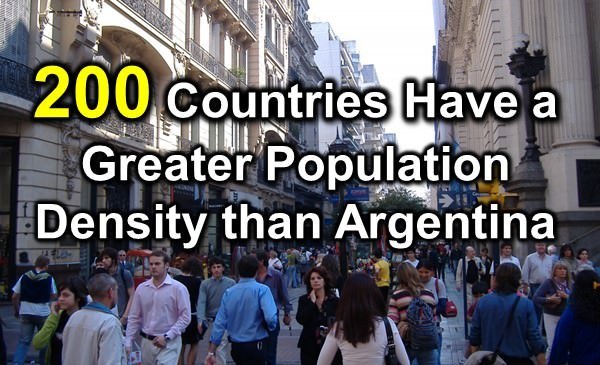 There’s plenty of elbow room in Argentina! This leads us to another of our Argentina facts. While Argentina has a population of over 40 million people, the area Argentina covers is very large in size compared to its population. There are more than 200 countries in the world with a greater population density than Argentina. 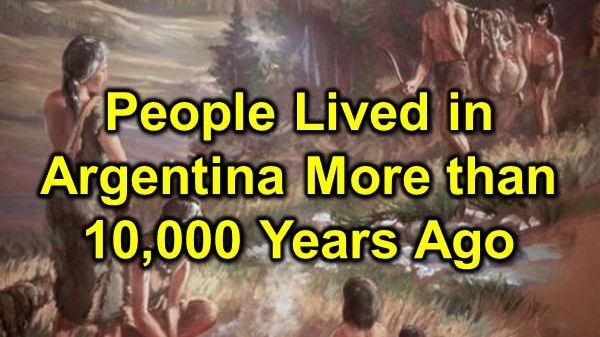 Based on research by archaeologists, we now know that Argentina was never heavily populated. Get ready for another one of our surprising Argentina facts: people lived in Argentina more than 10,000 years ago!

According to archaeological records, native people of all levels of development lived in Argentina in the time before the European settlers arrived.

The most developed people lived in the northeast of the area that would later become Argentina. These were farmers who practiced slash and burn agriculture. In the central part of the country, there were also farmers who raised llama. In the northwest, there was a population of traders, who were conquered by the Incas.

6. Amerigo Vespucci Was the First to Visit What Would Be Argentina 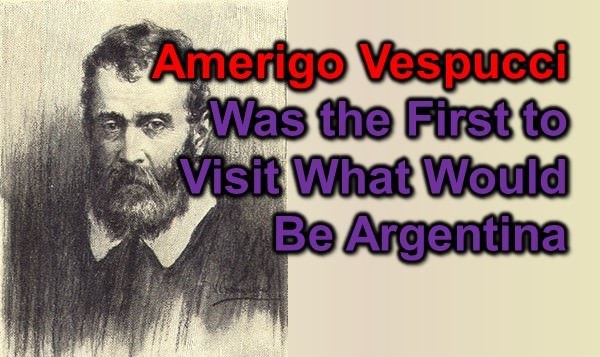 Amerigo Vespucci, for whom the Americas were named, was the first European explorer to visit the area near Argentina. In 1516, Juan Díaz de Solís led an expedition for Spain to South America and reached the Rio de la Plata, which would be the basis of the name for the Spanish Colony.

In 1536, Pedro de Mendoza established the settlement of Buenos Aires, though it was to be abandoned five years later. After further exploration, and the establishment of additional settlements, Buenos Aries was founded again in 1580.

The area that would become Argentina served Spain mostly through its river systems, which were used to transport silver and gold from Bolivia and Peru. This leads us to another one of our historical Argentina facts: Argentina was part of the Viceroyalty of Peru until 1776, when the Viceroyalty of the Rio de la Plata was established.

7. Argentina Declared Independence from Spain in 1810 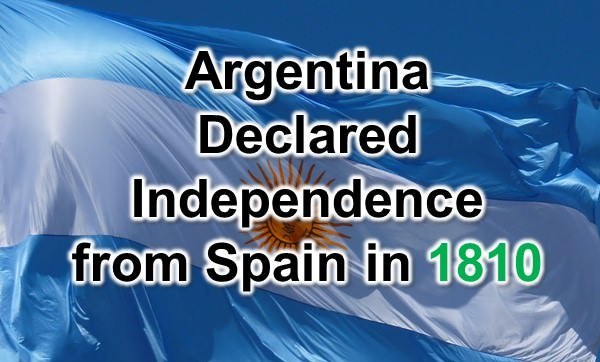 In May of 1810, the people of Argentina began a revolution for independence from Spain. This is one of the Argentina facts that can teach us something about South America. During the 1800s, in South America, colonies began to resist control from the governments of Europe.

At the time of declaring independence, The Viceroyalty of the Rio de la Plata included large areas that are now parts of Bolivia, Paraguay, Uruguay and Argentina. Imagine: Argentina could have been an even bigger country!

In the early 1800s, the King of Spain, Ferdinand VII, was defeated by Napoleon. As events unfolded in Europe, it wasn’t clear which government the Argentine people should follow. The revolution in 1810 began the Argentine War of Independence.

It’s one of the interesting historical Argentina facts that the Argentine people were hesitant to stake a claim for themselves. The official Argentine Declaration of Independence didn’t take place until 1816.

You should also read: Ecuador Facts, and share this blog “Interesting Facts” with your friends. 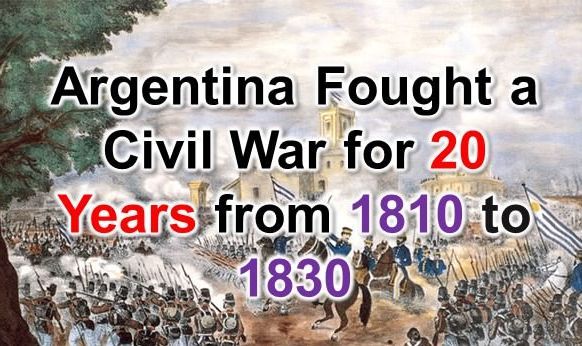 Shortly after the Declaration of Independence was issued, two political parties formed in Argentina. This is one of the historical Argentina facts that would shape the formation of the new country. Argentines were divided as Centralists and Federalists.

The decades from 1810 to 1830 were defined by civil war in Argentina. The Centralists and the Federalists fought over territory. In 1831, the Federalists won and the Argentine Federation was created.

Juan Manuel de Rosas led the Federalists and became the leader of the Argentine Federation. Although the civil wars had largely ended, Buenos Aires continued to fight to be an independent state from Argentina.

By 1861, Buenos Aires was unified with the rest of Argentina, and nearly half a century of civil unrest in Argentina was brought to an end. These Argentina facts can tell us much about the rest of the world during this time. Major changes in governments were taking place all over the world in the 1800s.

9. Immigration from Europe to Argentina is 2nd only to the US 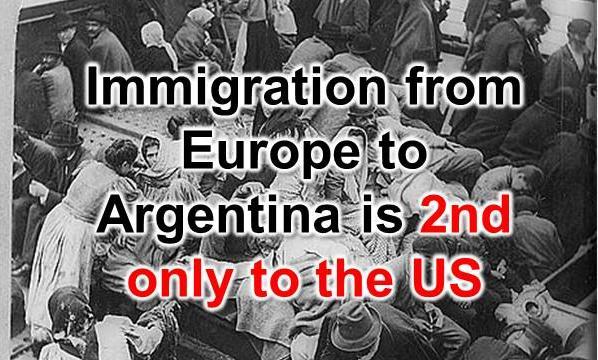 By 1910, Argentina was the seventh wealthiest country in the world, ahead of Germany, France and Canada. However, Argentina was slow to bring its economy into the Industrial Age. As a result, its position in the global economy suffered. 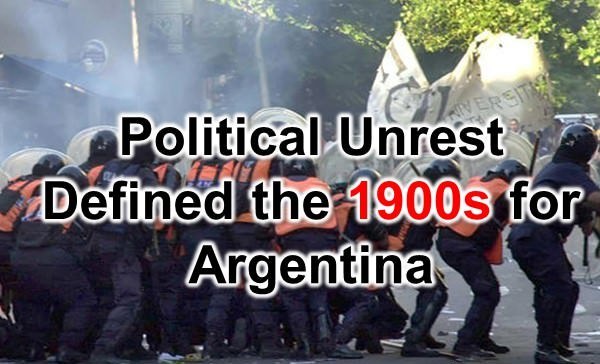 One of the sad Argentina facts is that after enjoying decades of incredible growth and prosperity, a military coup in 1930 began a period of political unrest that would last until the end of the 1900s. Because of the country’s political instability, and the inability of Argentina to modernize, it steadily declined throughout the 1900s.

There was a moment of hope when Juan Domingo Perón was elected by popular support in 1946, and nationalized all the large industries in Argentina. His wife Eva Perón worked to provide women with the right to vote and was very popular in Argentina. Eva Perón tragically died of cancer, and her story has been featured in many books and movies.

Despite Perón’s popular support, his policies were a failure, and more political unrest followed, including numerous coups of the governments in power throughout the 1950s and 1960s.

Finally, by the 1980s, after suffering a humiliating defeat to the British in the Falklands War, democracy was again installed in Argentina. Argentina continues to struggle economically, despite the country’s vast natural resources.

The political unrest of the 1900s did not allow Argentina to invest in its infrastructure for continued growth. More recently, Argentina has seen relative political stability as injustices committed by past governments are addressed and the economy slowly mends.

Argentina was home to a wide range of people before the European settlers arrived. From hunters and gatherers to farmers and traders, the country had a rich native culture. One of the bloodiest Argentina facts is that the first expedition into Argentina up the Rio de la Plata resulted in the death of the captain.

Since then, Argentina, with its vast resources, and its system of rivers that connect South America to the sea, has not seen continual stability or growth. After declaring Independence from Spain in the 1800s, Argentina began a long series of civil wars. The size of the country was reduced by these wars. However, Argentina remains one of the largest countries in the world.

While there may still be a few gauchos roaming the grasslands, Argentina is now modernizing to catch up with the rest of the world. Political unrest throughout the 1900s left Argentina behind in terms of development after the country had experienced incredible prosperity following a wave of immigration.

The future of Argentina looks good and, for now, it looks like more positive Argentina facts will emerge. The current government is addressing crimes committed by former officials. New economic policies are bringing Argentina’s economy back to life. As the country heals from its wounds, it will continue to play a big role in South America and the rest of the world.